I was disappointed during last week’s GOMA visit to see that Michael Parekowhai’s lovely elephant statue The World Turns had been cordoned off. I’m not sure whether it’s been done to protect the lawn or the sculpture but given no one ever paid any attention to the old signs instructing you not to climb on it, I suspect it’s the latter. If that’s the case then it’s a real shame.

If you’ve been lucky enough to wander through New York City’s Central Park in Summer, you’ve probably seen this:

Hoardes of children clambering over the Alice In Wonderland sculpture being watched by their parents, many of whom had memories of having done the same thing when they were young. Created by Spanish sculptor Jose de Creeft in 1959, the sculpture was commissioned by philanthropist George Delacorte as a gift to the children of New York City. Yep, 1959. And you know the best thing about it? Rather than ageing disgracefully as so many playgrounds do, the bronze has taken on a beautiful, rich glow. Fifty years of children loving it has literally turned it gold.

From the 1950s through until the 70s, it wasn’t uncommon for children’s play areas to be sculptural in design. Artists of the time were recruited to design play sites inspired by various art movements such as Modernism, Cubism etc. The result was avant-garde playgrounds that weren’t just aesthetically pleasing, but more challenging for children than the usual swing set and slide, requiring imagination not just energy. That the children were also learning about and engaging in art while they played made the whole experience even more worthwhile.

I fully understand the need to respect and care for public artwork, but public art is exactly that – it is for the public’s enjoyment. If a gallery is going to display a work in the middle of a grassy area used as a lunch spot for visiting school groups (not to mention downhill rolling races as part of the Brisbane Writer’s Festival kid’s program), then best you make it robust because children will probably want to climb on it. If the sculpture in question happens to be an upside down elephant staring at a native water rat then children are definitely going to want to climb on it. Fortunately, The World Turns is made from bronze. It bloody well is robust. It also has incorporated into the design a chair. For people to sit on. It was clearly made to be interactive.

I know The World Turns wasn’t commissioned to be a piece of playground equipment, but maybe it should have been. Rather than creating even more spaces that children are banned from lest they damage them, why not take the opportunity to teach children about art without stifling their desire to touch and feel it? We know children are tactile, kinetic little sponges, and playgrounds are an excellent opportunity to harness that potential. Considering GOMA have such an excellent kids’ program inside the gallery it seems silly not to continue it in the outdoor areas – especially given how much Queenslanders love being outside.

And hey, in fifty years time Brisbane could end up with a golden elephant. Some might call that luck… 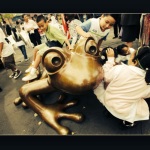 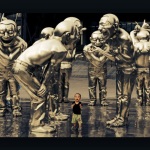 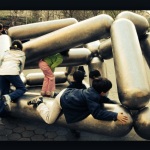 For more on playground design in the 20th century, and some more brilliant images, check out http://www.play-scapes.com/

Super sad news that Hossein Valananesh has died after a massive heart attack. I have long loved his beautiful poetic works, such as For Honey, which was commissioned by @buxton_contemporary in 2020 ❤️
Today’s #sundaysculpture by Dutch artist Mark Manders is also reflective of today’s mood! Mentally preparing myself for tomorrow’s first day back at work! 😩😬
Don’t let the door hit your arse on the way out Novak! Shame you couldn’t do something for the refugees in detention while moaning about your mistreatment in Australia.
Paul Yore, summing up the mood of the country I’d say…