As festive periods go, Easter doesn’t have much to offer me. I’m not religious, I don’t eat eggs, I don’t like chocolate, and I have no interest in chickens unless they’re rotating around the BBQ chook rotisserie oven in Woolworths. I don’t even get to enjoy the break because I work over Easter. But I do love bunny rabbits. Not real ones that poop and wee and need lots of attention (I have a dog for that), but the rabbits of folklore – the ones in children’s literature, movies and art.

Bunnies and I go way back, to the day I was born in fact. I was given this guy, who became my favourite thing ever:

As bunnies tend to, one quickly became this: 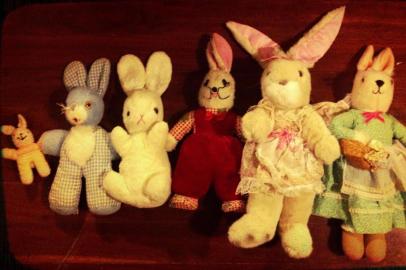 And…well…then it just went on and on until I had more bunny playthings than Hugh Hefner.

I’ve discarded most of them now, keeping only the ones that I really can’t bear to be separated from, but I still love a good bunny sighting when I’m making my way through the world. And so on this Easter night, when everyone else is getting their fill of religion or chocolate or an extended weekend,  I thought I’d put together a gallery of my favourite cultural bunnies.

Leporiphobics should look away now…

Down The Rabbit Hole by Salvador Dali

How Brother Rabbit Fooled the Whale & the Elephant by Alcee Fortier c/- http://www.gutenberg.org

Henri Matisse, A Family of Rabbits

Shinji-ko Rabbits’ by Satoshi Yabuuchi at Shimane Art Museum Japan (Rubbing the one 2nd from the front is good luck!)

The Big Yellow Rabbit by Florentijn Hofman displayed in Orebro, Sweden during OpenART 2011

Bambi’s Thumper, from the Disney archive of images.

The Velveteen Rabbit by Margery Williams

Watership Down, image care of http://www.dailymail.co.uk

Catch Me If You Dare by Benjamin Godard