There are times when I really do have to pinch myself at how lucky I am to do the things I do as a result of this blog. Even though it’s work, it does seem a ridiculous privilege to be invited to watch special performances, meet stage legends and go back stage – especially when shows like Anything Goes sail in to town.

Media calls are odd things. Even crusty old journos occasionally get nervous at them. The performers are on show of course, but so are the reporters, and it makes for a strange energy. I almost never elect to interview because I’d rather play observer, though occasionally I get drawn in by performers wondering who the creeper is lurking in the shadows. But for the most part…you know… “I like to watch.”

I realised this week though that I also like to listen. Sitting in the Lyric Theatre waiting for the proceedings to get underway, I could hear the dancers offstage in their tap shoes, shuffling and giggling; Gerry Connolly somewhere there too, relaying a joke in his instantly recognizable voice; the orchestra in the pit rustling sheet music and tuning instruments; and a lighting tech buzzing around checking marks with the guys in the booth. They’re the moments outsiders aren’t generally privy to, and it’s thrilling to sense the anticipation building. It reminds me of when I was little and a performer myself, waiting in the wings for my cue. Trying to walk quietly in tap shoes was never something I could master (dancing in them was a struggle too, hence why I’m strictly an auditorium dweller these days).

To see a cast perform at a media call is to immediately pick up on the relationships between players – who gets along and who doesn’t, how the ensemble reacts to the star of the show, whether there’s chemistry between leads, and if there’s any cracks in the façade.  A production like Anything Goes is polished to perfection by the time it’s performed, so the media calls are a lovely chance to glimpse behind the scenes and witness the peculiarities of a stage performer’s life, and the boundless energy required to sustain it. For the cast of Anything Goes, who had won three Helpmann awards the night before, there was an extra bounce in their step and they didn’t mind us knowing it. 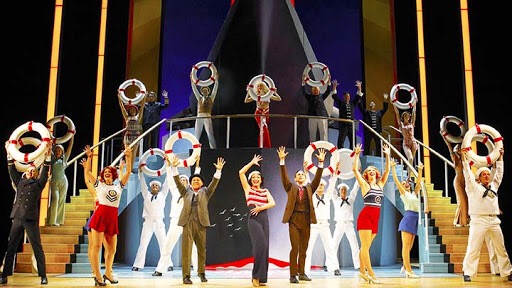 Established as a classic a long time ago, Anything Goes is probably the best loved of Cole Porter’s musicals. It is witty and funny in a 1930s way, with a bright set, stunning costumes, energetic choreography and some of the most well known musical numbers ever performed. On opening night, almost every song was met with coos from the audience as they recognized the first bars of You’re the Top, It’s De-Lovely, I Get a Kick Out of You, Blow Gabriel Blow, Let’s Misbehave and Anything Goes. That it has an ending my mum’s blind dog could see coming from behind a brick wall, and a moment of racist profiling as awkward as Mickey Rooney in Breakfast at Tiffany’s, is forgivable because the rest of it is so damn joyful. It isn’t a show that takes itself seriously for one minute, though the recent addition of a reprisal of the title song in Mandarin as a nod to contemporary times doesn’t hurt either.

It feels a long time since Brisbane has played host to a proper Broadway extravaganza. Oh, I know we’ve had some great shows recently, but there’s been something a bit lacking in the spectacle of it all. Or maybe it’s just that it’s been a while since we’ve had a megawatt theatre star like Caroline O’Connor treading the Lyric Theatre’s boards. Whatever it is, Anything Goes perfectly fills that void. A joint effort between Opera Australia and John Frost, this revival was originally produced by Lincoln Center Theater in New York, and the benefit of their influence is apparent throughout. Anything Goes has always existed purely to entertain, and slick direction and excellent casting have ensured that remains true of this production. But ultimately this Caroline O’Connor’s show.

Cole Porter may as well have written the part of Reno Sweeney for O’Connor as for Ethel Merman, and the producers halted production in order to fit in with her schedule. It was worth the wait. From the minute she appears onstage to show-stopping applause, O’Connor has the audience eating out of her hand. Having appeared in the Cole Porter biopic De-Lovely back in 2004, we had some idea of how she’d play it, but to see her live onstage in the role is to witness a homecoming of sorts. Sutton Foster wowed me on Broadway in the same role a few years back, but after seeing Caroline O’Connor’s Reno I can’t imagine anyone else in the role. She is a powerhouse, a tiny but commanding stage presence, yet she appears a generous lead who is happy to share the spotlight with her cast mates. Plus she can belt out a tune after an eight minute tap routine, something I couldn’t do even with a week’s rest in between. Perhaps she’s bionic. She’s certainly without peer in Australia.

So, was opening night a success? Well, Brisbane audiences rarely get to their feet, even on opening nights, so two standing ovations and seven bows is a bit like seeing a unicorn bounce through QPAC. It was wonderful to see locals so enthused by a night at the theatre, humming and jazz-handing their way out.

My advice is to get in quick, because as word gets round about the fun being had aboard the SS American, good tickets will be hard to come by. And you’ll high-kick yourself if you miss out.

PS: If you’re a fan of Cole Porter & haven’t seen De-Lovely starring Kevin Kline, you ought to give it a look some time. Here’s a snippet, featuring Caroline O’Connor:

Vale 🖤
Lovely little enclave at HOTA of works by three great artists: Elisa-Jane Carmichael, Libby Harwood & Judy Watson.
Skewed perspectives and tiny details in William Robinson’s ‘Lyrical Landscapes’ at HOTA, Gold Coast.
This one goes out to my Sydney friends and family heading back out into the fray today! Here’s hoping your new premier knows what he’s doing 🤞🤞🤞.