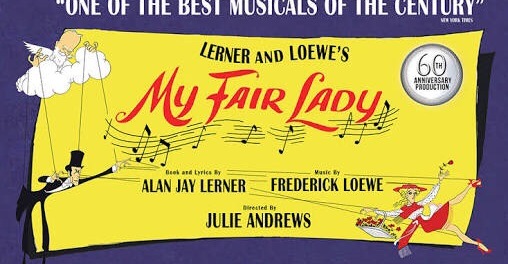 The word “legend” is waaaayyyyyyy too overused in the entertainment world, but when it comes to Dame Julie Andrews it’s almost an understatement. One of the world’s best loved and most enduring stars, Andrews is in Australia to direct My Fair Lady for Opera Australia.

It’s 61 years this week since My Fair Lady made its 1956 Broadway debut, with Andrews originating the role of cockney flowerseller Eliza Doolittle alongside Rex Harrison’s Professor Higgins. She would go on to play London’s West End too, although the film role eventually went to Audrey Hepburn in deference of Hepburn’s higher degree of fame.

Andrews of course went on to win hearts (and a Best Actress Oscar) as Mary Poppins, before skyrocketing internationally as Maria in The Sound of Music, but My Fair Lady remains the one role she wishes she’d nailed on film. Perhaps in the role of Director, for which she has received enormous praise, she is finding a degree of consolation.

A faithful recreation of the Broadway original (John Frost described it as exact “down to the last sequin” at this week’s media call), this My Fair Lady broke box office records in Sydney late last year – so much so, it’s heading back to the Emerald City after the Brisbane and Melbourne run. Much of that success must surely be the curiosity and awe a name like Julie Andrews inspires.

For actress Anna O’Bryan, there is no more daunting a prospect than performing the role of Eliza Doolittle under Andrews’ educated eye, though Andrews herself describes her as “perfect” (not that you’d expect a director to describe their leading lady as shit during a media call, I suppose). O’Bryan, for her part, is still pinching herself.

With a cast like that, tonight’s gala opening is bound to be one of Brisbane’s most starry starry nights. Be sure and get me to the theatre on time!