I like a freshly made bed as much as the next person, but nothing is as inviting as that same bed the next morning just after you’re out of it, all messed up and warm with your imprint. Some things are just better crumpled. Beds, like I said. Or wrapping paper. Your favourite big sloppy jumper, tablecloths, napkins, brown paper bags…things that have been used for pleasure and enjoyment, ones that show a good time was had and something wonderful occurred. To my list of delightfully dishevelled things I’m going to add artist McLean Edwards.

I first met McLean at our mutual friend Linde’s show opening in Brisbane a few years ago. I don’t actually recall if he was wearing slippers with his suit on that occasion, although there’s a fair bet he was given he has every other time I’ve seen him. He was sucking a beer and watching the crowd, probably trying to find someone fun amongst the usual gathering of serious faces at gallery openings. I don’t remember what we spoke about after being introduced, I just remember thinking he’d be great to have a beer with.

The problem with people who are good to share a pint with though is they can be dismissed as not being good for much else. Worse, they can start to believe it themselves. If you’ve pegged a guy as your good time pal you don’t necessarily want him to morph into a more introspective version of himself. But if that’s not what you’re after then don’t pick an artist as your drinking buddy and expect their thinking to go no deeper than the bowl of peanuts on the bar counter, you know? To seek out McLean solely for company at the pub is to miss entirely the best part of him.

He gives the impression of not taking the art world too seriously, but the more he talks the more apparent it becomes that he is both knowledgeable and respectful of it. I get the feeling he still can’t quite believe he can do this fun thing called painting for work, that he can earn a living by committing his daydreams and inner dialogues to canvas. Then again, I’m not sure anyone in any creative field feels any different. There’s always the sense of having dodged a bullet marked Responsible Adult Life, no matter how hard you work.

Last week in an article about the Archibald Prize, I mentioned that McLean’s face has been hung amongst the finalists almost as often as his own entries have. I understand why fellow artists are drawn to painting him. He’s a curiosity. A definitive portrait of McLean Edwards is both an appealing idea and hugely challenging because he’s impossible to capture. Trying to write about McLean is equally frustrating because words don’t do him justice either. I sent our friend Linde a photo of my enormous old thesaurus in frustration – “reckon there’ll be something in here to describe him accurately?” There isn’t. I suppose I could take the easy way out and list all the obvious things – that he’s funny and unconventional and warm. I could add that he’s modest, unassuming and wry, or describe his laugh and his slightly awkward way of interacting. Tales of his ridiculous generosity abound. He can tell a story at his expense that leaves you both slapping palm to forehead at the sheer absurdity of his life and glad he is the way he is. He is the kind of guy you’re eternally rescuing from trouble, but you don’t mind because the back story is always worth it.

There is a lovely moment in an interview done a few years back, where in the middle of a very eloquent and geniunely vulnerable discussion of how much he loves his work, he suddenly breaks off to ask the interviewer if he wants another beer. That’s McLean all over – a naturally intense thinker who snaps out of it the moment he catches himself sounding too much like one of those art wankers full of hot air and esoteric bullshit. It’s a great insight into the guy I’m trying to capture here, but  wish he’d just kept on talking because what he had to say was so touching.

McLean signs his work not with his name but with his age. The art critic Andrew Frost has described it as being a kind of countdown to his mortality, but to me it’s more like a journal entry. The subject matter may not be absolutely biographical, but as a collection of works seen in retrospect they are a beautiful tale of a life lived. The detail of his age gives context like place markers on a map, a ‘this is who I was when’ footnote. It’s an acknowledgement of the personal, but without specific reference to whatever cathartic element his paintings may hold.

I want to say that McLean’s paintings are a study in informed chaos, but that sounds like something one of the tosspots in the industry would say. They’re both scattered and composed, leaving the viewer to wonder how much of it is accidental. They’re a bit like him really. You can see the training and the influence of artists before him, but more than anything his works breathe with the same energy he does. They remind me of a lecturer I had at university who would spend a whole lesson drilling history into us only to end the class with “but it’s all irrelevant these days huh?” It was a bad joke, but there is something of that in McLean’s work. If the characters in his oil paintings could shrug their shoulders and remind us to not to take ourselves too seriously, I’m certain they would. They’re already doing that anyway.

McLean told me last year that exhibitions make him nervous, so I guess he’s feeling a little jittery right now given his new show opens at Martin Browne Contemporary this Thursday. He needn’t be worried though. The new works are brilliant, an insight into the human condition only McLean could provide.

I’ll be there to see it. I bloody can’t wait to have a beer with him. 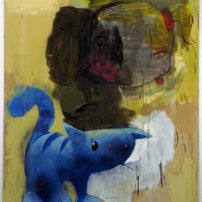 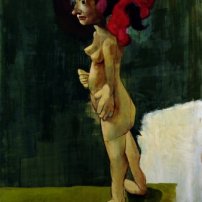 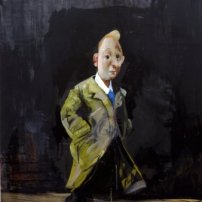 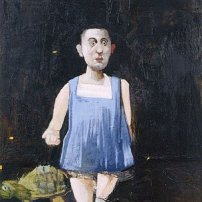 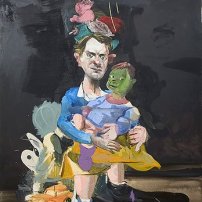 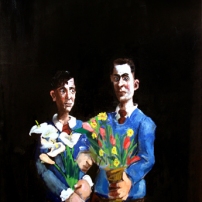 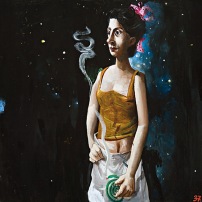 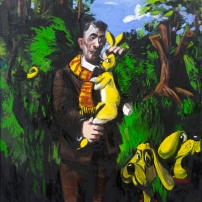 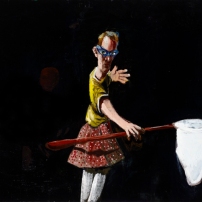 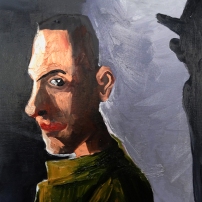 The Curious Case of the Cautious Widow 2013