“There’s a reason people build miniatures. Doesn’t matter if it’s guys laying out model railroads or women decorating dollhouses. It’s about control. It’s about reinventing reality. Some people get a lot of satisfaction in creating a little world they can escape to. In making things turn out the way they want, at least in their dreams.”
― Jane Lotter, The Bette Davis Club

Christmas Day, 1983. There is an enormous box sitting to the left of the tree, wrapped in what must have been yards of pink tissue paper. Honestly, it’s so huge I could live inside it. I wonder briefly if it’s the horse I requested, though pressing my ear to the paper elicits no evidence of it. I know it’s for me, I’ve had a peek at the card. I also know I’m not allowed to touch it until the rest of the relatives arrive. I am six, and the suspense is more than I can handle.

This turns out to be a pretty amazing Christmas for everyone. My uncle gives my aunt an incredible dining setting which has been secretly set up in our garage awaiting its reveal, my grandparents are given airline tickets to New Zealand which makes them both cry, and Santa has already been unbelievably generous to my brother and I. Eventually, when I really am starting to feel like I might burst from self restraint, the enormous pink box is lifted up on the coffee table and I ready myself. I am surprised to find out it’s a gift from my grandparents. I’d assumed something this big must have come from mum and dad and I’m taken aback. I can’t stop staring at my grandmother as dad and my uncle pull the present apart for me. Under the paper is a timber crate. It takes three of them to lift the top off. And then I see it…my grandfather has made me a dollhouse.

At the time, I’d never seen anything like it. None of us had. Though my grandad was always in his workshop hammering and turning timber, this was the first dollhouse he’d ever made and it was magic. Designed so that it opened like a book, it folded out to reveal a completely handmade Victorian home, with parquetry flooring, turned timber railings, tiny lighting that actually lit up, window boxes of little flowers, and a stained glass window. It even had a toilet. It was so beautiful I wasn’t sure I was allowed to touch it.

Making dollhouses would come to be his signature. After a lifetime as a master builder, he’d finally found his calling making miniature houses. Not one of the 50 dollhouses and countless smaller dioramas and toys he made were sold; all were given away. First to family and friends, then to hosptials, sick children and children whose mothers were battling cancer. He was a hell of a decent guy really. Like Santa, with less reindeer. 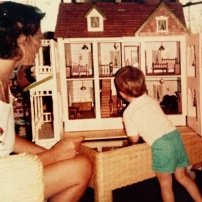 As a family, we learned to expect that time spent at my grandparents’ home meant being surrounded by not just dollhouses, but single room displays, tiny furniture and the porcelain dolls my grandmother made. Of course I was in heaven, though my two rough and tumble brothers were never quite as enamoured with the environment. I guess like most kids, the initial attraction of miniatures was in my ability to dominate them. When you’re small, you’re desperate to be in charge. Not only was I in charge, I was the overlord of an entire village. Eventually they morphed from tools for simple role play to become the world I preferred to inhabit.

Not that grandad’s dollhouses were my first introduction to miniatures. I had been escaping into tiny worlds and anthropomorphism ever since I was tiny myself. Brambly Hedge, The Borrowers, Darby O’Gill and the Little People, The Gnome Mobile, Thumbelina, Enid Blyton. Every garden had resident fairies. I was convinced little people existed in the cracks of our regular sized lives. I never did manage to catch grandma’s dolls moving when I wasn’t looking, but I knew they came to life as soon as the doors snapped shut. I’d read enough books to know that dolls were just scared little people, frozen with fear. I tried and tried to tell them they could trust me, that their secret was safe, but they never relaxed around me. A shame really; I could have done with their company in those days. I was a weird kid.

Anything made in miniature intrinsically fosters in me a desire to make believe. Curators in museums often talk about certain objects in their collections having an aura about them, an intangible energy that draws you to them. Miniature worlds are the same for me. Perhaps it’s the shadows within them, but I can always sense them breathing with the spirit of the person who spent so long crafting them. And yes I do know that sounds like horseshit, but it’s true. It’s a bit like the guy who went to the top of the Empire State Building after years of living in New York City because he wanted to actually see how the city moved, rather than just feel what it was like to live there. Life in miniature lets us observe the world with a bird’s eye view, clarifying as much as contracting our daily lives.

It’s no coincidence that contemporary miniaturists like Slinkachu, Steve Wheen, Joe Fig and Øystein Dypedal have such cult followings. By bringing to life these tiny people, they are highlighting just how small we all are in the general scheme of things and how inconsequential and fragile our existence. I guess it’s the ultimate irony that the best magnifier of the human condition is a miniature version of it.

Steve Wheen aka The Pothole Gardener

I suppose thirty years on from that Christmas with the massive box of miniature, I’m a bit old to play with dollhouses but I don’t care. Last year as I was going through some of my stored junk, I found the last dollhouse my grandad made. Significantly smaller than the others, with crooked windows and a staircase that didn’t align properly, it had been an alarming indicator to the family that all was not well with him. His work had always been so perfect. The badge on it read September, 2000. He died of brain cancer four months later. None of us knew what to do with this house, his last major creation. No one wanted to let it go, but neither did we want a distressing reminder of how much his illness had taken away.

It remained boxed up until my friend Linde mentioned an idea for a short film, the special connection she’d had to her grandfather, and the father who had made all his children except her, the youngest, a toy. I truly could feel my grandad listening in, telling me that I’d found the proper place for it to go.

A few weeks later, when the dollhouse had been shipped off, I got a message from its new owner. “I’m trying to imagine a man who spent his whole life making home.” I teared up, I think my mum and uncle did a little too when I told them. It was a profoundly perceptive statement about the man I’d known. We’d become a bit blase about grandad’s dollhouses over the years. I never considered that they signified anything other than his ability to use a lathe. But years of ill health had made my grandfather an anxious man who never felt secure outside of his own little castle. Perhaps in making these houses so continuously, he was trying to work out more than just a scale model. I’ll never really know for sure.

There is one thing I’m certain of though. In a world that had become too large for him to navigate safely, he found comfort within the Lilliputian walls he was constructing. 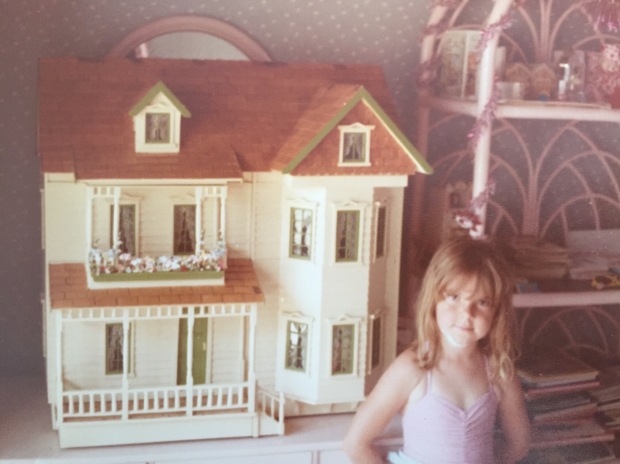 This one goes out to @scottmorrisonmp @senatormichaeliacash @anne_ruston and the rest of our “fearless leaders” who think constantly punching down is a great way to bring us all up 🙄🤯.
Archibald crowds made it almost impossible to get a good look at exhibitions by Victoria Reichelt and Gabriela Soelkner at Tweed Regional Gallery. Bit of a shame, but good to finally get here and see Tori’s newest works in the flesh after the year of dodgy borders! ❤️
A lovely selection of Arthur Boyds at Tweed Regional Gallery
Brilliant group show at Elevator ARI, Lismore - ‘Combustion Athletics’. Selection of works here by (L-R): Home School Acheiver [NB - artist’s spelling, NOT mine! 😂], Michael Donnelly, Sascha Bravery, Michael Donnelly, Maggie Schreiber, Antoinette O’Brien, and Miriam Salomon