Sitting on Nikky Morgan-Smith’s back deck overlooking the hinterland of Northern NSW, it’s hard not to imagine yourself taking flight and soaring out over this beautiful part of the world. Tucked down a bumpy old goat track in an area west of Byron Bay, the home is a bohemian hideaway situated in one of Australia’s most pristine regions. Veiled by the bush on all sides, it is typical of the bush retreats in the area. It has its quirks, as most places in Northern NSW do. Real estate agents would describe it as a renovator’s dream or as having a unique charm.

Inside, it is the human equivalent of a bowerbird’s nest. Signs of a life gathered together are everywhere. Antique and reclaimed furniture fill the rooms, throw rugs and cushions cover the lounges. There are cabinets full of drawers. A mix of abstract and botanical art covers the walls. A pink plastic flamingo resides in the dining area, a 1920s telephone sits on a hall table on the veranda covered in dust. Out in the garden, an old toilet bowl overflows with fernery. The place has a good feel to it. On that wide back deck, sipping tea and playing with an enormous doe-eyed dog known as Basil, I felt a million miles from anywhere. And I was, sort of.

On the long drive there, I wondered who Nikky Morgan-Smith would turn out to be. We’d only ever communicated via email and text message prior to my visit. I knew nothing other than what I’d read online, and artist bios are never much to go on. I had a sense she’d be a little timid, based on a few things she had mentioned in correspondence, but the fact that she had reached out to me about featuring her on Cultural Flanerie indicated a degree of tenacity and self-determination. I had suggested meeting at her studio before I wrote anything, because I like to know the person I’m writing about (crazy, I know…), but studios are sacred spaces as I’ve written about before, and I was aware Nikky was a little daunted by the idea. Nevertheless, she agreed, and when she greeted me at the door it was with a hug, an apology about the mess, and the offer of a cup of tea all in one go. Though initially nervous about my arrival, we were soon chatting comfortably. 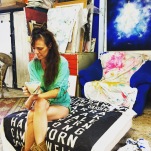 Nikky in her studio 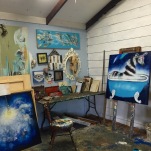 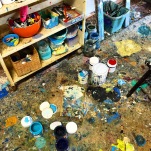 To listen to Nikky talk is to hear an artist in transition, at that point in a career where you question where you are and where you want to be – and have to deal with all the worries and complications that line of enquiry throws up. It is the eternal dilemma of the emerging and early career artists. Hell, it’s the dilemma of the mid-career artist too. Do you stick with what’s selling because the bills need paying, or do you push yourself to experiment with what your instincts are telling you? It seems particularly difficult for those artists with commercial representation, dealing not only with their own indecision, but the added burden of gallerists who see dollar signs where their creativity ought to be. What’s that saying? Something about “creative executive” being the greatest oxymoron? Anyway…

Living out of town, isolated from industry chatter, allows her the distance she needs to ignore external forces and stay focussed on her art practice. The art world is one Nikky knows well, having been raised by parents who are both artists themselves (the abstract and botanical canvases hanging inside turn out to be the work of her father and mother respectively). That she comes from serious art stock probably doesn’t help ease the pressure she feels, especially given how far removed her own style is from either of her parents. Yet Nikky has managed to make a name for herself with her bright, improbable scenes of exotic animals in suburban bathrooms – giraffes taking showers, elephants squeezed into bathtubs and peacocks commandeering hand basins. The whimsically styled, absurdist subject matter is at first glance a bit of topsy-turvy fun, carnivalesque in colour and movement, inspired in part by her travels through Cuba. But Cuban carnavales never exists without an element of chaos. There is always a touch of voodoo, an unpredictable and ominous underbelly lurking just behind the velvet curtain, and these works are no exception.

Like something from the mind of Lewis Carroll, Nikky’s scenes represent more than just animals pretending to be human. The bathtub, a place of serenity and relaxation for most of us, references a period in Nikky’s life when she sought refuge from the constant call of daily life behind a closed bathroom door and the white noise of running water. When the demons broke through the steam curtain she’d created, she used her art as a process of self-therapy, with animals providing the physical embodiment of the human condition – the deer in the headlights, the elephant in the room etcetera. And though she feels she still has more to say on the subject, she is no longer in the place she was, and is beginning to find inspiration in other places, and other states of being. Perhaps that she is now back at university studying art therapy has also allowed her to transfer some of the remedial intent of her work off the canvas and in to helping others.

Interestingly, despite the representational nature of her work, Nikky views herself more as an abstract artist. When she talks about her process, she talks about the motion of her brush and her body as she paints. It is an organic and expressive working style, with a fluidity that I would love to see unleashed on large scale pieces such as murals and street art. Tellingly, she mentions having been excited by the artwork she saw on the streets of Barcelona, but strangely unmoved by the great masters hanging in the art museums of Europe. A residency in France last year gave her time to reflect and reassess, though a gallery show scheduled immediately after her trip meant putting on hold whatever creative momentum had been building. A forthcoming solo show at Lismore Regional Gallery, her current focus, will be an excellent opportunity to revisit her time away and explore those contemplations. From what I saw of the new ideas taking shape in her studio, something very beautiful has been ignited by her experiences overseas.

Back on the deck, with Basil doing his best to convince me he’s a lapdog despite being the size of a pony, it occurs to me that I’m not the only one resisting the desire to take off and fly above the landscape. Nikky, too, is ready to propel herself forward into the discoveries she knows lie ahead. Unlike me though, she already has a strong set of wings. She just needs to trust her instincts and take a running jump into the void.

Subscribe up to Lismore Regional Gallery here for details of Nikky’s forthcoming show. 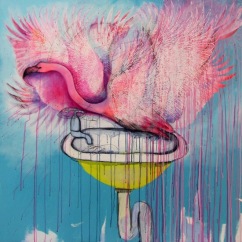 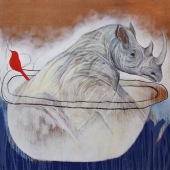 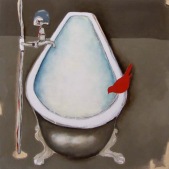