I wrote the following essay for Bosz Gallery to coincide with local artist David Jones’ current exhibition The Colonial Collective Problem. I don’t normally publish commissioned pieces on here but, given the proximity to ANZAC Day and the ongoing quest for proper recognition of Australia’s Frontier Wars, I thought it too important not to feature his work and inspiration.

Jones is a fascinating individual. Initially shy and reticent, his awkwardness soon gives way to passion and barely constrained anger as he discusses the continuing racial ignorance he sees committed in this country. It’s an uncomfortable conversation to experience one on one, particularly if, like me, you consider yourself a pretty evolved and sensitive individual. To realise that much of what you hold dear (ie May Gibbs has a special place in my heart, being something I shared with my beloved and much missed grandmother) is nothing more than a series of painful reminders of an entire culture’s whitewashing, is both sickening and embarrassing. But Jones isn’t looking to vilify contemporary white Australia. He wants only that we stop, from this moment forward, allowing the whitewashing to continue. Through his art, he wants the horrors of early conflict to be understood, and our nation’s history to be accurately portrayed. To see the myths we revere replaced with genuine respect and remorse for the estimated 30,000 indigenous people killed between 1788 and 1934 would, for Jones, be enough.

Australia prides itself on having a strong culture of remembrance, especially as ANZAC Day approaches. It is at best nonsensical, and at worst downright offensive, not to include the largest and most catastrophic of this nation’s conflicts in that remembrance. 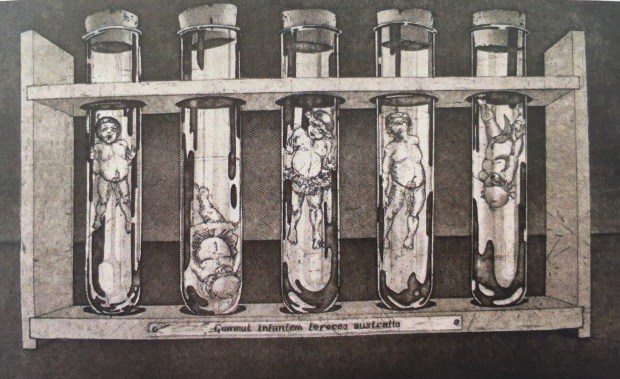 David Jones ‘The Colonial Collective Problem’ is on view at Bosz Gallery until 30 April 2016. Click here for more information on the gallery website.

“David Jones is a crusader. A man of Butchalla, Dalungdalee heritage, he wields his art as a sword with which to cut down some of the most revered myths upon which our national pride is based – stories of our colonial past, of Cook’s arrival and the bushmen explorers, and the foundation of a nation on the back of the ANZACs. Critiquing the instititionalised and casual racism he sees breeding through ignorance and denial, Jones highlights the inconvenient truths that risk tainting the pioneer/settler narrative that underpins so much of this country’s identity.

It is confronting to discover that everything we know about our cultural heritage is based on denial and historical revision – that the stories, legends and folklore are nothing more than fantastical re-imaginings of a sad and bloody past. From May Gibbs’ milky-skinned gumnut babies, to the Man From Snowy River and The Wild Colonial Boy, we’ve covered this black land with white stories at every turn.

Indigenous voices are largely excluded from historical records of early conflicts, yet their stories persist in the whispers of the trees and lands that bore witness to the violence. Our indigenous oral traditions and sites are powerful reminders that history has never adequately been told, and that it is up to white Australia to validate the grief and right the wrongs.

David Jones, through his intense gaze and unapologetically acerbic commentary on modern Australian society, seeks to tackle the cognitive dissonance with which Australia views its past and demand that we delve deeper into our collective history for answers to The Colonial Collective Problem.”

1 Comment on David Jones and The Colonial Collective Problem

Copyright © 2020 Create a free website or blog at WordPress.com.