Time really does stand still when you’re at the opera, doesn’t it? Or rather, it doesn’t stand still so much as shoot you way back to a time before finicky worries like cultural appropriation and pedophilia were considerations.

I think I was about fifteen minutes in to the opening night performance of OperaQ’s Madama Butterfly when I started to feel weird. Two old blokes on stage discussing the innocence and physicality of a fifteen-year-old girl will do that to me, especially when the audience reacts by laughing. Add in the fact that there was only one legitimate Asian on stage amongst a chorus of about 30 playing Japanese, and well, what can you do but shrug your shoulders and go along for a ride into creepy town? 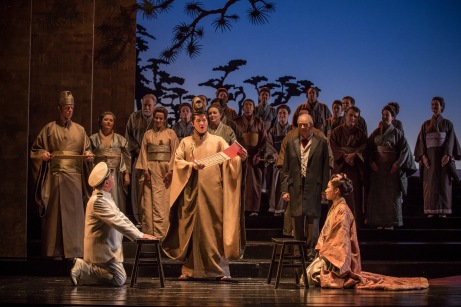 Moral and ethical misgivings aside, this revival of Puccini’s Madama Butterfly is stunning. An Australian exclusive, it is visually breathtaking – like falling headfirst into a Japanese scroll. A joint collaboration between Artistic Director Michael Grandage and Designer Christopher Oram, it’s minimalist staging makes excellent use of the Lyric Theatre’s limitations. In fact, I’d go so far as to say it’s one of the most beautiful shows I’ve seen in almost 40 years of theatre going. The fact that the Lyric boasts some of the worst acoustics known to theatre buffs is almost able to be overlooked when the set is so darn pretty. Almost. 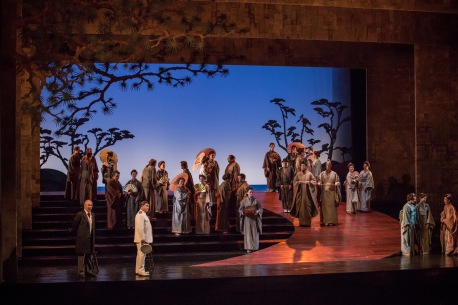 The Lyric’s acoustics have always been a problem for unmiked performances. Twenty years have passed since Hayley Mills got media-blasted for her faint singing in The King and I. Sure, as a singer she made a great actress, but a lot of her problem was that you’d have to have lungs like Kieren Perkins to reach the back rows of the Lyric Theatre without a microphone. Nothing’s changed in the last two decades. Accompanied by the Queensland Symphony Orchestra, who sounded superb under conductor Johannes Fritzsch, the performers occasionally struggled to be heard, especially those singing in the lower registers. It’s a real shame, because the cast is sublime when you can hear them, the standouts being Hyeseoung Kwon and Hayley Sugars as Madame Butterfly and her maid Suzuki respectively. 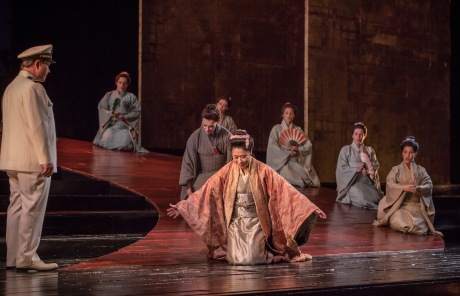 QPAC must be sinking under the weight of their own sophistication at the moment, with the Playhouse housing both Queensland Ballet’s A Midsomer Night’s Dream and Queensland Theatre Company’s thoroughly brilliant Much Ado About Nothing over the last month, and now the Lyric Theatre hosting Madama Butterfly. It’s made a very pleasant change from their usual offerings of ‘tried and true’ musicals featuring soapie stars and ageing divas.

But I do wonder at what point contemporary society will demand of opera what has already been demanded of movies, television and theatre – that the whitewashing stop. It’s a tough call, considering both opera’s European history, and the relatively small pool of talent from which to cast performers. Nevertheless, we are now a truly global society and librettos that were originally written for European opera companies are now staged the world over. What’s more, opera houses are crossing over into live digital broadcasts and cinematic transmissions in order to compete with modern entertainment options. With such platforms used increasingly to revitalize the genre, there will come a point at which they’ll have to change their approach to casting in order to avoid appearing antediluvian. Contemporary audiences are increasingly sensitive to representations of race, and will be viewing these performances through eyes that see whitewashing as a mortal sin. Opera will have to yield eventually in order to survive. 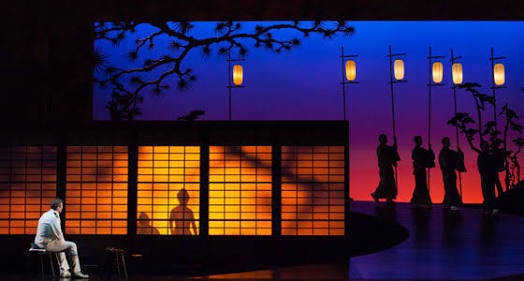