Born in East Germany prior to the Berlin Wall’s collapse, Denise Reichenbach brings a particular artistic sensibility to her work. A hybrid form of painting, drawing, collage and sculpture, her work swings between abstract and figurative composition, dealing with the complexity of human relationships. She incorporates strong references to her German background in history and art, but makes room for intuitive exploration through the conscious deskilling of her painterly technique. Her current series is a messy, chaotic and at times quite violent handling of the detritus of a long term relationship breakup. With unbridled emotion never far from the surface, this is a very raw exploration of what is hers and what isn’t in the world, seeking authenticity without being influenced by thoughts of success or outcome. Through her art practice, she is attempting to let the strain of heartbreak, confusion, femininity and the search for identity come to the fore, taking inspiration from masters like Willem de Kooning, Cecily Brown and Hilma af Klint to propel her forward.

In a career spanning over a decade, Reichenbach has exhibited widely, and taken part in several residences throughout Europe and Australia. Since emigrating to Australia in 2008, she has been a finalist in the Queensland Figurative Award, the Bayton Award, the Emerald Art Prize, the Martin Hanson Memorial Award, the D1 Kunstsalon in Leipzig/Germany and the Lethbridge Small Scale Award.  In 2012, Reichenbach was the recipient of a Highly Commended Award at the Brigalow Art Festival in Biloela. Now living in Brisbane, she has studied at the Academy of Visual Arts in Leipzig, the National Art School in Sydney and at the Queensland College of Art (QCA). 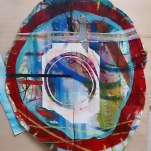 Reichenbach’s work is currently on view as part of The Ambience Store Project #6 until 5 September 2016.