Opera Q is knocking it out of the park at the moment, and I say that as someone who doesn’t know enough about either sport or opera to use such metaphors. But I do know Gilbert & Sullivan because, well, who doesn’t? Their operettas are like a Dummie’s Guide to Opera…the opera you’re watching when you’re not watching opera…aka musical theatre.

Emerging as a theatrical partnership in Victorian-era London, W. S. Gilbert and Arthur Sullivan collaborated on fourteen comic operas between 1871 and 1896, of which H.M.S. Pinafore, The Pirates of Penzance and The Mikado are firm crowd pleasers [NB: think I saw The Pirates of Penzance approximately eleventy-seven times in the 1980-90s, always with Simon Gallagher in the lead role. Don’t judge me, judge him]. However G&S’s little-known Ruddigore rarely gets a run anywhere in the world. I don’t know why; perhaps because the story-line is a bit whacko even for a musical. 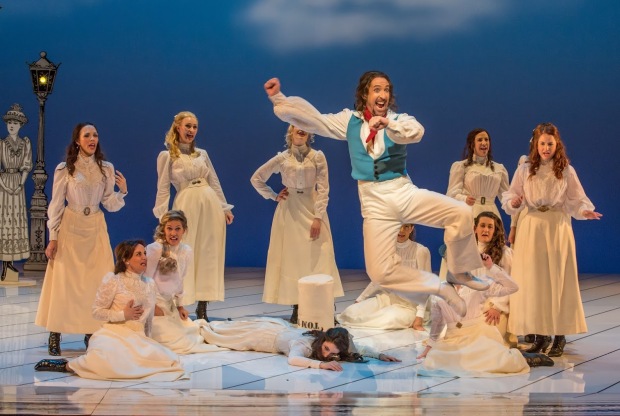 The premise: Young Robin Oakapple and Sweet Rose Maybud are in love, but unwilling to admit it until Oakapple’s sleazy sailor half-brother tries to throw a leg over Sweet Rose. But Young Robin is hiding a secret, living under an assumed name to avoid inheriting the title of Sir Ruthven Murgatroyd, Baronet of Ruddigore – a noble lineage cursed to performing daily evil deeds or be tortured to death by the ghosts of his ancestors. The title fell to Oakapple’s younger brother in his absence, who’s none too pleased to discover his older brother alive and much happier than he. For some reason there’s also a chorus of desperate bridesmaids waiting for Sweet Rose to get married so they can too, and a local crazy who falls in love with said younger brother and turns to the Salvos in search of redemption. I know. Singing cats and masked phantoms are getting more mundane by the second.

I’m all for giving in to nonsense and just enjoying the show, but Ruddigore’s storyline is a bit hard to keep track of, particularly as the action flits quickly between characters that are never more than one dimensional. Having said that, Director Lindy Hume has done a great job of fleshing out several characters. Mad Meg, played by audience favourite Christine Johnston, is a highlight. Ordinarily played for laughs as the town nutter, she’s given real heart in Johnston’s empathetic portrayal. Other standouts include Bryan Proberts as Robin Oakapple, Jason Barry-Smith as his brother, and Roxane Hislop as Dame Hannah. Kanen Green was as good as he always is as the slimy Dick (so to speak). There was also a face in the chorus of maids that kept taking my attention throughout the show. A bit of old fashioned googling told me her name is Katie Rutledge. She’s a total scene stealer. 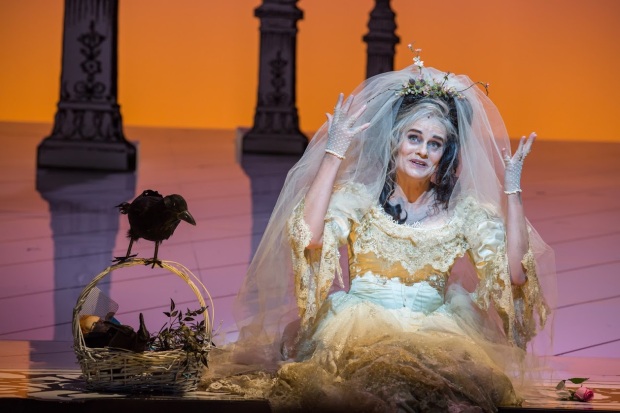 Visually the production is great, performed within a sparse black and white set designed by Richard Roberts that forms the perfect canvas for the fast paced choreography, and beautiful costuming. And although the production design can’t decide whether it’s inspired by Victorian-era goth, cartoons, pop art or tattoo parlours, it works, helping to suspend reality and add to the absurdist nature of the play.

There are no foot-stomping, show-stopping hit songs, and the rapid fire singing that is a signature of Gilbert & Sullivan’s operettas isn’t as clear as it ought to be, but Ruddigore still provides a night at the theatre worth getting dressed up for. The cast is fabulous, the staging fun, and the songs could potentially grow on me. Plus they have tambourines and take the mick out of the Salvos, which always wins points with me.

This is the last show for Lindy Hume as she nears the end of her tenure as Artistic Director of Opera Queensland, and it’s a good one to go out on. Her talent for picking the rare comedic gems, and the works that might just sway audiences teetering on the edge of becoming opera fans, will be missed.

Ruddigore by Opera Queensland
At the Playhouse, QPAC, until 29 July 2017