At first glance, Belem Lett’s paintings appear like highly sophisticated versions of Rorschach ink blots. It’s only on closer inspection the you notice the tiny inconsistencies between the two halves, indicating the works aren’t resultant of folding the image over to create its twin. Rather, they are testament to Lett’s interest in pattern and repetition, and the fallibility of the handmade. His painstaking process of replicating by hand his gestural brushwork on both sides of the canvas is as much about inconsistencies and unpainted surfaces, as it is about precision and technique. 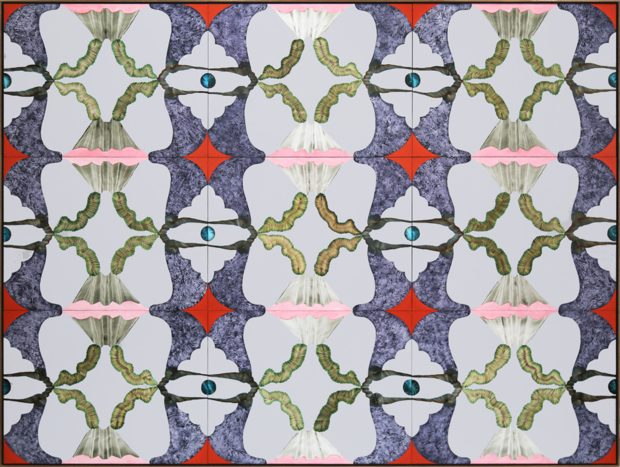 Experimental and highly decorative, the works concertina across their substrate in a playful pastiche of architectural aesthetics and gestural abstraction. Heavily referencing Baroque decoration, shamanic art, and digitally duplicated imagery, they are also deeply connected to Lett’s familial connection to South America. More than an experiment in painting, the finished compositions provide a kaleidoscopic view of Lett’s world that is hallucinatory and completely mesmeric.

Awarded a Master of Fine Arts by research from UNSW Art and Design (formerly COFA), Lett is a past recipient of the Brett Whiteley Travelling Art Scholarship and undertook a residency at the Cité Internationale des Arts, Paris in 2011. Highly Commended in the 2017 Elaine Birmingham National Watercolour Prize, he is a multiple-time finalist of the Fishers Ghost Art Award, as well as the 2016 Chippendale New World Art Prize, the Sunshine Coast Art Prize and the Paddington Art Prize.