Charmaine Pike’s sublime landscapes are both tense and uplifting, recalling the 19th century painting trend for personifying nature in order to reflect the human condition. Employing bold line work and a sophisticated, moody colour palette, Pike draws us in to a surreal world of sensuous rock formations, undulating, wild vistas and post-apocalyptic moonscapes reminiscent of luminaries including Philip Guston and Russell Drysdale.

Alternating between en plein air and studio-based work, her paintings are as much an expressive response to being on the land as they are a record of her emotional states, memories and personal contemplations. Intimate, majestic, and possessing an ambiguous beauty, they capture nature’s omnipresent splendour and the powerful effect environment can play on our emotional and psychological well-being. 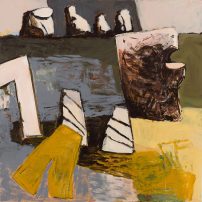 Charmaine Pike (b. 1973, Bathurst) is an Australian contemporary painter based in Dural, a northern suburb of Sydney. An alumna of the University of NSW/College of Fine Art (COFA), she won COFA’s Inaugural Drawing Award in 1996 and graduated Bachelor of Fine Art in 1997. Pike is a two time finalist in the Paddington Art Prize (2017, 2016), a finalist in the Mosman Art Prize (2013) and the Adelaide Perry Prize for Drawing (2010), and winner of the Lloyd Rees memorial Youth Art Award (1998). Her work has toured extensively through regional New South Wales in numerous exhibitions, including a widely acclaimed solo exhibition at Tamworth Regional Gallery (2012). In 2013 Pike undertook the Enid Ng Artists Residency, Paris, and was selected for inclusion in Regional Art Australia’s ‘Place and Practice’2014 National Visual Arts Showcase at Parliament House, Canberra. She was awarded the 2017 Nock Art Foundation Artist Residency in Hong Kong and China alongside senior Australian artist Angus Nivison, and will exhibit at the Nockart Gallery, Hong Kong, in 2018.