When Sydney artist Linde Ivimey was looking for a new studio space a few years ago, she chanced upon a two story warehouse in the inner west that was exactly what she desired. Built in the early 1900s as a mail dispatch centre, it had been converted into a bright and airy living space upstairs with a large light-filled workshop below, and was the perfect place to merge home and studio time the way she needed. But perfect places come with imperfect asking prices, and the building was out of Linde’s reach.

Back in her existing studio she tried to reconcile her disappointment, only to find her mind drifting again and again to the warehouse in Turtle Lane and the life she could envisage there. Using her collection of brown paper bags, she sketched out her dreams and explored ancient cultural mythemes of the Divine Turtle, a giant tortoise that carried the world on her back. Into one, she placed a few totems, money and a little turtle she had fashioned from a champagne muselet. With the reverence of a Benedictine monk, she kept the bag like a shrine, surrounding it with candles and praying for a solution.

Inevitably these meditations made their way to the workbench, and soon a sculpture began to take shape as a sort of invocation that a real estate miracle might occur. The result was an endearing self-portrait of Linde as her bunny alter ego, her companion a little turtle on a lead. The bunny’s gaze was steady, with one hand shielding her eyes as if to get a better view of what lay ahead. Entitled Turtle Lane, it was a deceptively simple piece, its inspiration hidden behind its whimsy.

Not long after the work was completed, a change in circumstances saw Linde able to revisit her options, of which the still available warehouse was now a viable one. There was little hesitation in deciding what her next move would be. Turtle Lane was hers.

Those who know Linde personally know that the story of Turtle Lane represents a very ‘Linde’ solution to a problem. Put simply, she is unlike anyone else you’ll meet. Deep contemplation, prayer, ritual and a sprinkling of something akin to voodoo are ever present in Linde’s approach to the world, but so too is a delight in ridiculousness and childish mischief-making. Passive existence is not an option for her, engaging instead in a constant process of learning and self-betterment. She seeks guidance widely – whether that means turning to the mystics of ancient worlds, her Catholic upbringing or the wisdom of Judge Judy (I may be disowned for divulging that), but she can also be surprisingly cynical for someone so receptive to new ideas. She is a delightful conundrum, having the peculiar honour of being both the sanest and most insane person I know. Almost every conversation between us results in me shaking my head in disbelief, an action just as likely to be caused by an outrageous one-liner as it might a profoundly moving reflection on her life.

These contradictions are something Linde wears with pride, and her home and studio are testament to that. A visit to Turtle Lane feels like you’re taking a walk through Linde’s personal timeline. She keeps her memories close, surrounding herself in reminders of her past and present, and each quirky corner of the place helps tell the story of how she came to be. Works from every stage of her career sit alongside childhood toys, special books, travel souvenirs, and treasured objects. That they share the space so harmoniously highlights just how intertwined all aspects of her life actually are.

I have written before about the talismanic properties of Linde’s artwork, but every time I stay at Turtle Lane I become more convinced that the building too pulsates with a mysterious energy. Perhaps it’s the floorboards, already carrying the imprint of so much history, and the way their cracks catch fragments from the workbench as Linde’s sculptures come to life; or maybe it’s the sunlight that streams through the louvres, giving all the quirks of the old warehouse an ethereal glow. Elevated above the surrounding buildings, it feels oddly secluded despite the proximity of the neighbours, and is one of the few spots where I feel myself completely unwind. I’m not the only friend who feels this way. Linde’s home is comforting and welcoming, a happy place where friendship and creativity are celebrated. In the last couple of years Turtle Lane has also become a fortress of sorts, providing sanctuary and security as Linde fought some agonizing personal battles. On the days when everything was proving a little too much to bear, there was always Turtle Lane; a cocoon into which she could retreat for convalescence and to process all that she had endured.

Linde’s most recent body of work, Cross My Heart, is a reflection on this time; an exploration of the coping mechanisms she employed to face the world beyond the protective buffer Turtle Lane allowed her. Engaged in a childlike game of dress up, the characters in this show are hiding their true identities behind elaborate costumes and role-playing. Is the fearless lion exactly who his ferocious roar says he is, or does a teddy bear hide behind that mask? Is that an exotic giraffe loping through the party, or is she just a little lamb trying to stand out in the crowd? In the same way that we all find ourselves occasionally wearing a mask to hide our personal truths, these sculptures too are finding self-preservation in putting on a brave face. Visually, Cross My Heart is lighter and more playful than much of Linde’s work, and has allowed her to show off her considerable drawing talent as well as some new and signature sculpting techniques. But for her friends, this is perhaps also Linde’s most confronting show, in that it forces us to acknowledge just how much she hid from us in order to protect both her friends from the truth, and herself from our reaction to it. 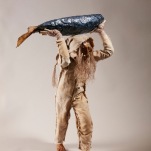 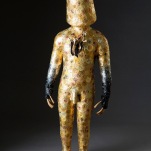 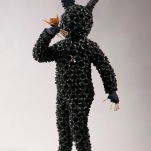 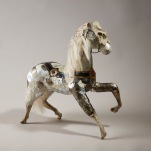 Today, the sculpture Turtle Lane sits on a table in Jan Murphy’s office, an unassuming presence in an always busy gallery. It has been there for a little while now, mostly because Jan professes to be unable to part with it. But perhaps there is something more serendipitous to its prolonged stay, given the works from Cross My Heart arrived in the gallery just last week. Maybe, just maybe, little Turtle Lane knew she had to be there to protect these new characters as they made their way from the safety of the studio to the big wide world beyond.

As long as there is Turtle Lane, everything will be okay.