I am SO excited to share the essay below! Written for Edwina Corlette Gallery, it was a fun one to research & write, and covers beautiful new work from two seriously great women. Aussie girl power to the MAX here!

“Sometimes, as the song goes, it’s hard to be a woman. So much of who and what we are is determined by the stereotypes we encounter, and our response to them.  Show ourselves as strong, and we’re seen as overbearing; allow a gentle side to peek through, and it’s a weakness upon which we’re judged. We exist between two extremes. Are we the Virgin Mary, or Mae West? Joan of Arc, or Joan Crawford? We are either nymphet or witch depending on how we evolve, with little regard for the stages in between.

The notion of femininity has become so fraught. Feminism, feminist theory, the act of being female are now heavily loaded with baggage. No wonder many women profess a complex relationship with the ‘feminist’ label. We’re rather busy reconciling our own relationship with femaleness as it is to join the wider fight, involved constantly in contemplations of the self, how we are portrayed, and the image we project onto the wider world. Self-censorship and self-sacrifice are the rituals of womanhood that we have inherited from our cultural foremothers.

For artists Tara Marynowsky and Abbey McCulloch, these are the contemplations that fuel their work. Both engaged in practices as multi-faceted and complex as women themselves, they transform their experiences of being female into highly personal visual languages, using mythological and archetypal imagery to symbolize the feminine psyche, womanly beauty and psychological pain. Exploring notions of identity, they disseminate what it means to be feminine in a world that values machismo and supremacy over traditionally female characteristics such as gentleness and compassion. Though their individual approaches are quite different, Marynowsky with her eyes on the past and McCulloch with a view to the future, both are engaged in stripping back the façades women construct and have constructed for them, converging at the point where their lives are impacted as women negotiating the world today.

Marynowsky’s explorations begin with depictions of women in the late Victorian era, extending back to ancient and medieval folklore. Looking at the changing representations of women throughout history, Marynowsky broadens the nymphet to witch trajectory by reimagining modern women as contemporary mystics, incorporating the magic and symbolism of classical mythology into her work. Using vintage postcards and found images of women, Marynowsky summons her own experiences to invent narratives for the anonymous faces, painting herself into their histories and imagining common threads. Layering them with her markings, she reclaims their individuality, giving them back their colour and pizazz. The effect is hallucinogenic and absurd, rendering the women well beyond the traditional notions of beauty into the realm of the surreal and grotesque, echoing traditional fables of beautiful young women becoming tortured old sorceresses, and vice versa. 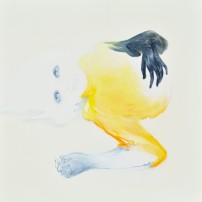 For McCulloch, the influences on her practice are more obviously private. An insightful witness to how females engage with the world around them, McCulloch has made her career capturing the emotional extremes, vulnerabilities and charms of ordinary women. Here, she expands on her studies to consider the metamorphoses of women ageing. Each canvas is a subtle dissemination of our anxieties, a slow casting off of the protective skin we build up over the years. Using her art as an opportunity for intensive self-reflection, McCulloch allows the women in her paintings to guide her to a place of acceptance – discovering that it is possible to amass life experience without becoming hardened, and finding liberation and delight in forsaking the defensiveness of youth.

In Rawhide we see a new style of feminist art emerge – one that chooses nuance over explicitness, and celebration over confrontation. Together, Marynowsky and McCulloch concertina the past to the present, and leave open the future for continued evolution.”

Rawhide: Abbey McCulloch and Tara Marynowsky is on view at Edwina Corlette Gallery until 9 July 2016. 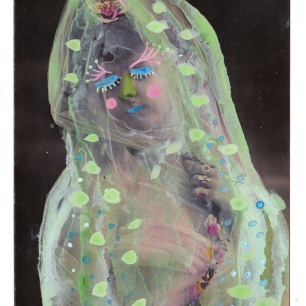 Sophie Singer’s ‘i still love you pluto’, a generative artwork that’s a quirky, totally charming, interactive love letter to the dwarf planet 🪐
Collection works on display at Ipswich Art Gallery:
Lincoln Austin: The Space Between Us at Ipswich Art Gallery, curated by lovely Samantha Littley 😍
Loren Yagoda is perhaps best known as a painter and interior designer, but I’m fully in love with this Arizona-based artist’s paper clay ceramics 😍