I first chanced upon the work of Andy Harwood in a café in Brisbane’s Paddington. Waiting for a business meeting with someone who never showed, I was distracted by the brutal lines and intense colour scheme of the art on the walls.

As it turned out, Andy Harwood was no stranger to Brisbane’s art scene, having amassed an impressive CV of exhibitions and artistic engagement as a co-founder of the much missed artist-run collective Love Love Studios.  After undertaking residencies in Brisbane, London and Berlin, Harwood became increasingly drawn to the work of abstract masters (Duchamp, Kandinsky, Malevich and Rothko), and began exploring the aesthetics of hard geometric abstraction about a decade ago.

Harwood’s compositions are mathematically constructed studies in analysis, reason, contradiction and balance, with an architectural sensibility not unlike that of Bauhaus revolutionary Josef Albers. Albers, whose career was spent contemplating the problems of light and colour within geometric frames, was a significant contributor to the study of perception, and his influence is seen in Harwood’s prismatic compositions, whose work contains the same considerations of dynamic form and space, and evocations of colour field painting. 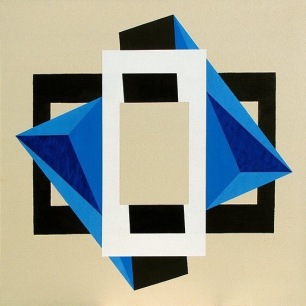 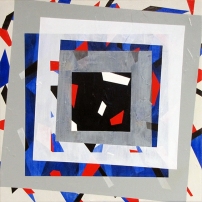 You can see Andy Harwood’s latest series of works as part of The Ambience Store Project #5, on view until 1 August 2016.

Copyright © 2020 Create a free website or blog at WordPress.com.