There is something eerily familiar about the trees that have begun to sprout up in Tim McMonagle’s work in recent times. An artist who has spent almost two decades disseminating human nature’s foibles and absurdities through his whimsical compositions, McMonagle has increasingly found himself compelled to consider the curious lifecycle of our majestic native gums. Already rich with folkloric, religious, and cultural symbolism, trees take on even greater significance in a country such as Australia, where the bush and outback landscapes are so closely intertwined with our national identity. Endlessly diverse in form, character and colour, their broken limbs and struggle for new growth provide McMonagle with the ideal allegory from which to contemplate the complexities of humanity and our connection to environment. Knotted, gnarled, and rather like a surreal Australian version of Blyton’s The Magic Faraway Tree, they dominate his canvases the way they do the outback, anthropomorphised to appear as the ultimate survivors in an unforgiving landscape.
But it isn’t solely McMonagle’s unique observations on life and the milieu that makes these works so compelling. Concurrent to his propensity for quirky imagery is a deep and abiding respect for the act of painting. Each canvas is a testament to his commitment to technique and mark making, and the enjoyment he gets from pushing paint around while lost in the creative process. Though an important element of his work, his subject matter becomes less about conveying sentiment than it is a device for capturing attention and luring his audience in. Doggedly devoted to his artistic practice, he rehearses each piece by sketching and drawing his ideas multiple times so as to become intimately acquainted with every line and detail. By the time he is ready to commit to the canvas, he knows the image well enough that he is able to make his brushstrokes appear spontaneous and organically formed. Seen up close, each fragment of the whole could potentially be observed as its own abstracted composition, such is the detail of his work.

Born in New Zealand, Tim McMonagle has spent the majority of his life working and studying in Melbourne, Australia. Winner of the 2010 Fletcher Jones Art Prize for his work The happy song, he was named a finalist in the 2012 Archibald Prize for his portrait of art collector Michael Buxton, and has twice been amongst the Wynne Prize finalists (2015/16) for this series of tree landscapes. A veteran of over forty solo and group exhibitions, his work is held in major public, private and university collections throughout Australia.

Tim McMonagle is now represented by Edwina Corlette Gallery. You can see his work in the stockroom now. 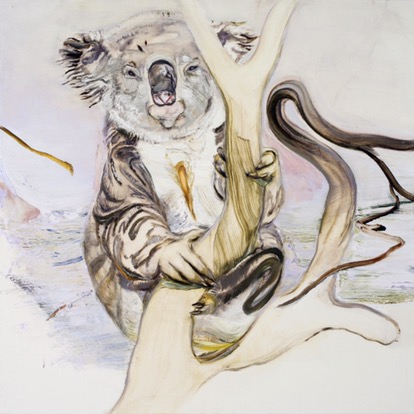 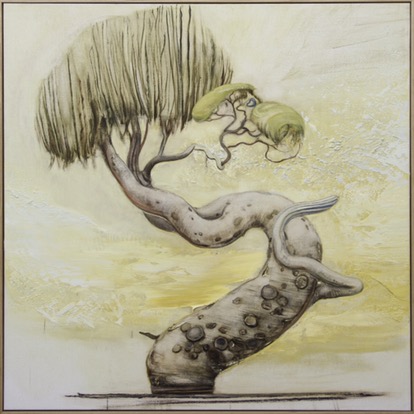